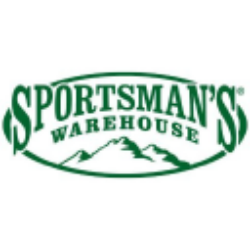 shares of Sportsmans Warehouse Holdings Inc (SPWH) on
You would have made
AMOUNT
today.
Old Price $12 Current Price $12

Sportsman’s Warehouse Holdings, Inc. engages in the retail of sporting and athletic goods through its wholly owned subsidiaries, Sportsman’s Warehouse, Inc., and Minnesota Merchandising Corp. Its products include hunting and shooting; archery; fishing; camping; boating accessories; optics and electronics; knives and tools; and footwear. The company is headquartered in West Jordan, Utah and currently employs 1,700 full-time employees. The firm has outdoor specialty store base in the Western United States and Alaska. The firm has over 87 stores across approximately 22 states, which are located in power, neighborhood and lifestyle centers. The firm also operates several single-unit, standalone locations. Its stores average approximately 40,000 gross square feet. Its stores include locally relevant features, such as a fishing board at the entrance that displays fishing conditions in local lakes and rivers with coordinating gear in end-cap displays in the fishing aisles. The firm engages its customers through in-store features, such as the Braggin Board, various contests (such as Bucks & Bulls and Fish Alaska), and customer-owned taxidermy displays on the walls. The company also hosts in-store programs, such as ladies night and a range of instructional seminars, from Dutch oven cooking to choosing the right binocular.